Did you know there are some horror movies out there that were filmed in our favorite spooky attractions? Click here to check them out!

The Scariest Haunted Houses to Visit for 2022

Looking for the scariest haunted houses to visit for the 2022 Halloween haunt season? Here’s a list of haunts with our highest “Scare Factor” ratings.

Team Terror Techies traveled up to British Columbia earlier in October to visit a few haunts in the area.

Team Floridead checks out The Haunted Road on their media preview night for 2022!

Are you looking for the biggest, best and scariest haunted houses, haunted trails, hayrides, scream parks, and more? Here’s our list of the top 31 haunted houses to visit in 2022 (based on our 2021 review scores).

Spook Show 17 takes us behind the scenes of The 17th Door Haunted House (Fullerton, CA), reality TV show style! Here’s our review of the show, which is set to air on September 28th, 2022.

Team Teachers of Terror, Team Zombillies, and Team Enchanted Seance joined the Haunted Honeymooners’ Nick and Suzze as they took on the red bracelet challenge at one of the most extreme haunts in Ohio

Our team doesn’t generally visit many attractions in the state of Michigan. But, when a few avid haunt-visiting folks reached out to us to let us know that Eloise Asylum was an absolute must-see, we had to find out just how good it was for ourselves.

Check out our list of Guides for visiting Haunted Houses and Halloween attractions for the 2021 haunt season!

The Scare Factor has joined forces with the Haunted Attraction Network to provide haunted house coverage for the 2021 Halloween haunt season! #hauntathon

The Real Waverly Hills Sanatorium – An Inside Look in 2021

In the South-West corner of Louisville, Kentucky, there’s a secluded and forested hill. It looks quite unsuspecting to drivers on nearby Dixie Highway. But, beyond that lies a particularly-interesting 5-story structure on this unsuspecting hill. That structure has become known as one of the most haunted locations on the planet.

The Lizzie Borden House B&B Experience: How Scary Is It?

Lizzie Borden took an axe, gave her mother forty whacks. After she saw what she had done, she gave her father forty-one. Or so the rhyme goes…

Join The Scare Factor at FearExpo!

Join The Scare Factor and our Scream Teams at FearExpo; a free virtual trade show and convention for haunted attractions and fans! 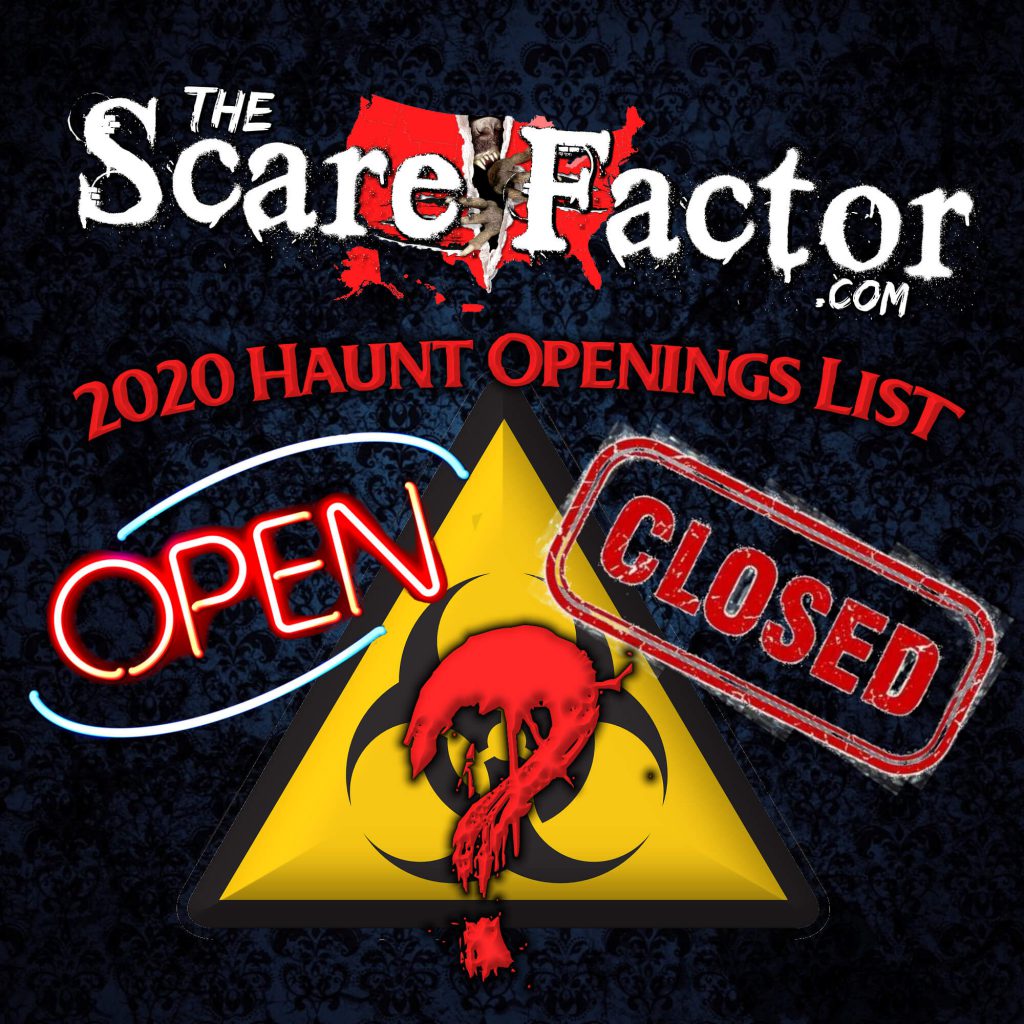 This is our ongoing list of confirmed (to date) Halloween haunted house openings and closures due to COVID-19. Check back often, as this list can be updated daily.

Team In-Corpse-A-Rated received a special invite to view Blind Scream haunted attraction in Santa Rosa, California. Here’s an inside look at what they’ve got planned for next season…

The Louisville Jack O’ Lantern Spectacular – An Inside Look

Take an inside look with us at The Louisville Jack O’ Lantern Spectacular in Louisville, Kentucky!

Evil Intentions unleashes a new level of sinister for the 2019 season!

Midnight Terror Haunted House 2019 – A Chicago Legend in the Making!

We had been hearing of a new attraction in Indy where guests would be “immersed” in an “interactive experience.” To us, it sounded like…

The accolades continue to pour in for Midnight Terror Haunted House in Oak Lawn, which opens for its sixth season on September 27.

Wondering who the Top 31 Fan-Voted “Must-See” Haunted Houses are for 2019? Here’s a quick way to find out…

The Fans have Spoken! Here are the results from this summer’s Fan Voting for our Top “Must-See” Haunted Houses poll…

Take an underground journey into the Lemp Brewery Haunted House, a top-rated haunt in St. Louis Missouri that is said to be actually haunted!

The fans have spoken! Here are the lists for the Top Fan-Voted “Must-See” Haunts in each State…

Dr. Terror Eyes gave us the inside scoop on the Southeast Halloween Enthusiast Convention!

Team Old Crow Hollow gets the inside scoop on Evidence of Evil’s newest attraction for 2018!

Back by popular demand is the Haunted Hydro’s Monster Makeoff: Tournament of Talent! Bob and Beth Turner (owners, The Haunted Hydro) and Jennifer Hartley (coordinator) have resurrected the event after last year’s massive success.

Here’s a list of Haunted Houses that are opening their doors for Friday the 13th!

So, have you ever thought it would be cool to be in one of those psycho killer horror movies like Texas Chainsaw Massacre, where this insane monster captures and throws you in some horrible little room for you to await your upcoming slaughter?

Are you looking to do something really cool and unique this Halloween season? Want to impress your date or friends with a “one of a kind” experience when touring haunted houses? Then look no further, as Vantricity Haunt Tours is the only service in the State where you get to ride around in a “zombie van”, driven by a zombie chauffeur, while visiting some of the best haunted attractions in the greater Genesee County.

Lots of new haunted houses will be opening their doors to the public for the first time this year!

The fans have spoken! Over the past summer, we hosted our second annual “Fan-Voted ‘Must-See’ Haunts” voting poll. To help scare seekers find the biggest, best and scariest haunted attractions in the land, we’ve posted the results here for the world to see!

With one week left before the poll ends, votes for the 2017 Top Fan Voted “Must-See” Haunts Lists are coming in faster than ever before!

Making the Most of your Haunted House Trips This Year

Haunted houses are all about the experience. From the wait in line ’till you walk out the exit – and sometimes after – you’re probably going to get pummeled with…

The leaderboards for our 2017 Top Fan Voted “Must-See” Haunts Lists are evolving! We now have 2 more States that have…

Quite a bit has changed since our last update! We now have 5 more States eligible for a Top Fan-Voted “Must-See” Haunts List and the number of votes …

Enter the Netherworld: An Exclusive Interview with Ben Armstrong of Netherworld Haunted House in Atlanta, Georgia!

After 21 seasons in Norcross, Netherworld Haunted House will be moving to new location next Halloween. Louisville Halloween got all the latest terrifying news from co-owner, Ben Armstrong.

Since voting went live a few days ago, haunt enthusiasts have cast THOUSANDS of votes for…

Crawl inside the Mind of the Demented Genius behind Wisconsin Fear Grounds!

We interview Tim Gavinksi, the founder and owner of one of America’s Top Haunted Attractions located in Waukesha, Wisconsin!

Meet the Head Inmate that runs the Asylum at Columbus’ ScareAtorium!

We interview The 13th Gate’s Makeup Witch Doctor, Blain Quam, to get a behind-the-screams look at the sinister southern culture that haunts both The 13th Gate and Necropolis 13.

We interview cryptozoologist and paranormal investigator, J. Nathan Couch, about his thoroughly researched book on the legend of Goatman across the USA and in our own backyard.

Most of you have probably heard about “the Haunted Hotel with 13 floors that no one has ever made it out of… and if you do… you get all your money back (or an ungodly amount of cash),” right? Well, we have never found it!

These videos may be too gruesome for some to handle. They contain blood, guts, gore, brutal violence, vulgar language and are some of the scariest haunted house videos we could find.

What Makes a Good Review?

The internet has paved the way for anyone to give their $0.02 about something (like Yelp, Trip Advisor, Google and Facebook). Because of that, it’s getting hard to weed out the good reviews from the bad ones.

Here’s our list of New Haunted Houses for the 2016 Haunt Season!

Burnout: A Big Problem with a (Not So) Simple Solution

It’s debilitating. It really is. Unfortunately, not a lot of veterans to the haunt industry have ever dealt with it. The truth is, many haunters deal with Burn Out much more often than anyone thinks.

You, the haunt enthusiasts, submitted over 80,000 votes over the past few months and we’ve finally made heads or tails of it all. The competition was fierce and the going got tough…

Oh, ho, ho, we’re back! The 2016 Haunt Season is nearly upon us, but before we run off to bask in the warm, fuzzy chills of this year’s attractions, let’s take a moment to reflect on last year’s stand-out attractions, shall we?

13 Haunted Attractions that are REALLY Haunted!

Every avid Halloween enthusiast loves a good scare every once in a while. This list has 13 Halloween haunted attractions with full-time “spooks” that can be more TERRIFYING than any scare-actor!

The first installment in our “13 Haunts” series covers some of the most UNIQUE haunts we could find from across the country!

Ever wonder who our “Top Haunts” are? This list contains some of the scariest, most high-tech, unique, creative and thrilling haunted houses our reviewers have seen!

This is where we’ll be sharing what we’ve learned from visiting, reviewing and travelling to haunts over the years. Hopefully we can shed some light on things that do and don’t work… both for operating haunted houses as well as visiting them.